(Questions were sent to the band early January 2021) 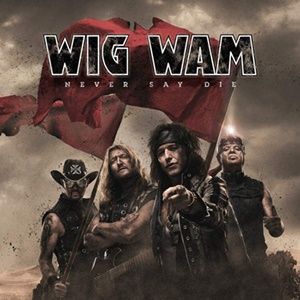 S-ROCK: Welcome back, boys! Your fans in Japan probably still call you guys by stage names because it’s easier for us to pronounce 🙂

(S-ROCK: We call the band members by their real name in our questions, thinking about their favorite way to be called by real name or stage name and the way they call themselves now. Sporty wants fans to call him “Sporty”, and Flash says “I suppose it’s easier for the Japanese to relate to our stage names, so you should use Flash 🙂 ” ) 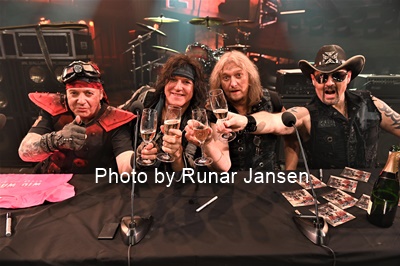 S-ROCK: Just listened to NEVER SAY DIE album and the first impression of it is that this is a very excellent gig-friendly album, I can imagine how next gigs will be like with these new tracks and WIG WAM have ever done amazing gigs. Did you guys think about forthcoming gigs obviously when you worked for the album?

Øystein Greaker-Andersen/Sporty: I am always thinking of upcoming gigs! What I do love the most is playing live! Sitting behind my drums, looking at all those people having a good time digging our music, thinking, I do really love this 😉 And of course, Never Say Die will be an excellent live track! 🙂 When I do drum sessions in studio I often think of what will be cool live also 😉

Bernt Jansen/Flash: I’m glad you see the album that way. When you write and record songs I’m always imagining how the song will sound like on a massive stage set. You picture yourself how the crowd goes mad and how the light and pyros will be 😊 But we’re always aiming for the best result for the album. Often these things goes hand in hand in our music.

Åge Sten Nilsen/Glam: I think whenever we write music for a rock band, our mindset have some focus on performing it live, in front of our fans you know. That’s a major part of the motivation anyway.

Trond Holter/Teeny: Thank you. Yes it’s gig friendly because we are a live band from our roots! That’s where we get our energy, with the connection from the audience!

Bernt, “Silver Lining” is what you wrote, with quite a different taste from a heavy tune like “Call Of The Wild” you sing on the album. What brought you the idea of the track?

Bernt/Flash: “Silver Lining” is a song I have had in the drawer for more than 10 years. Sometimes you write music regardless of genre. When I occasionally listen back to my demos it’s easier to hear the difference between the crap from the gems. I’ve always thought it was a song that deserved to see the light of day. And when we have a singer like Åge(Glam) I thought this is the moment to make it happen. And I must say It came out in a way I couldn’t dream of. The singing and the guitar solo at the end is tremendous. And the drumming and bass of course 😊. 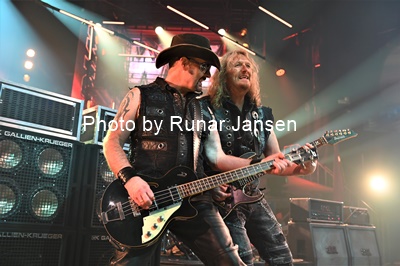 Trond, there are 2 instrumental tracks on this album, I guess you composed them (I’ve not seen the booklet of the album as it’s not out yet). The second departure of WIG WAM is like “The Second Crusade”? Or “Northbound”?

Trond/Teeny: The second crusade is written by Lasse Finbraaten from CIRCUS MAXIMUS because we wanted the atmosphere from his strings. This is WIG WAM’s second crusade and we are building a new chapter of history together. Wherever we are in the world, when a tour is over, we are always Northbound to get back home 🙂

S-ROCK: Åge talked about a plan of an streaming gig around the release date of NEVE R SAY DIE album, is that possible to watch it from Japan? And we can’t use Vipps here, if you guys have a PayPal account, maybe some Japanese fans will send you some money besides a ticket 🙂 The only problem is the time difference between Japan and Norway.

Bernt/Flash: I’m sure we will do what it takes to make our Japanese fans watch a streaming live gig. It looks like it will be a delay since the COVID-19 has made everything go in a lockdown right now. But as soon it’s over we’ll let you know 😊

Åge/Glam: There will be a live stream event during the release weekend. We are working on setting up our new stage, lights and all, to perform some songs and to do a live stream Q & A, free of charge and available to everyone across the globe. It will be a celebration of our comeback album and everyone is invited to join the party.

Trond, Bernt and Øystein, Åge talked about what had happened to you guys before/after the band broke up from his point of view in the interviews of BURRN! magazine, many Japanese fans got so shocked and felt sad when they read. How about your each story from your point of view?

Øystein/Sporty: It’s a simple answer to this; We had done too much of everything, too many years in a row… We were tired and fed-up. Personally, I do not look back in time so much… I’m positive thinking and looking forward to what to come in 2021 also 🙂

Bernt/Flash: When you are in a band like we were, it’s inevitable that there will be some resentment from time to time. We were gigging more than we should in periods and some of us were really tired. When we finally decided we should have a break, Glam made his Queen show idea happen. It really became a success. And then Teeny began to work on his DRACULA project and he and I started BABY SNAKES and there was less time for WIG WAM. We somehow found it fulfilling to work with other musicians and new inputs. All these side projects we had drove the band further apart. And when Teeny and myself joined the JORN in 2012 WIG WAM became the side project. All our energy went into all these bands and we finally decided to call it quits in 2013.

Trond/Teeny: A band is like a marriage. When you stop to communicate with each other, you are in trouble. That’s what we did. We didn’t talk to each other about anything, just kinda walked around like zombies. We sought out of the band and were tired of it all. Now, we have a close relationship again like we did at the start and having a great time together these days. 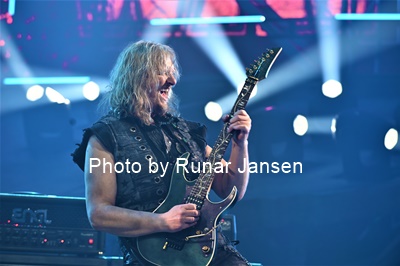 Åge composed “Faith Bloody Faith” for Jørn Lande who will participate in Melodi Grand Prix 2021 (Lykke til!) , and Trond and Bernt worked together with him for JORN, any interesting story about him?

Bernt/Flash: Jørn is a great guy! He talks a lot and has a lot of views 😊He is among the top 3 best singers in his genre in my view. An Incredible voice. He always brings his favourite pajamas on the tour bus 😊 The rest you will have to read about in his autobiography ha ha…

Åge/Glam: JORN is a very interesting person to be around. He’s a motormouth and can talk for hours if you don’t stop him. I remember meeting him in a public toilet years ago, before I knew about this, and while we were urinating we started to talk. The conversation, his monologue, turned into views on the Viking story, and I was literally trapped inside the toilet for almost 30 minutes, because I couldn’t find a gap in his stories to end the conversation and get out of there ha ha But he’s cute. We’ve become very close these past months. 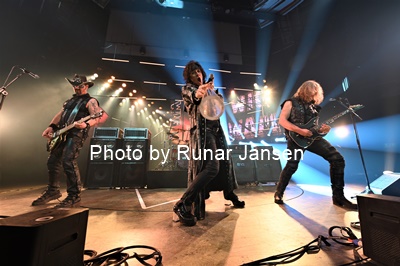 Trond and Bernt, any updates on BABY SNAKES?

Bernt/Flash: BABY SNAKES have recorded a brand new album and made a video. The release will be coordinated among whatever else happening, but sometime after the summer is the plan. We are really excited about that album. There will be some eyebrowse raised I’m sure 😊

Trond/Teeny: Yes, the album is ready and we are planing our next step for after the WIG WAM period.

Åge, NORDIC BEAST will be still a sleeping BEAST? *S* And when can we expect next AMMUNITION album, Erik Mårtensson is extremely busy as well though?

Åge/Glam: NORDIC BEAST is still a sleeping beast. When John Norum and Mikkey Dee started this unit back in 2015, I think it was a necessary move for Mikkey to have a touring unit when Lemmy started to slow down his MOTÖRHEAD touring. Lemmy wasn’t feeling too well, and Mikkey loves to live on the road. For John I think it felt good to have something outside the comfortable EUROPE zone too. We even started to work on some original materials but once Mikkey got the SCORPIONS gig he became more busy than ever. We haven’t officially broken up the band, so who knows. The collaboration between John and me has continued though, which led me to record some songs for his forthcoming solo album. We’re even talking about going out on tour together, focusing on his back catalog as a solo artist. 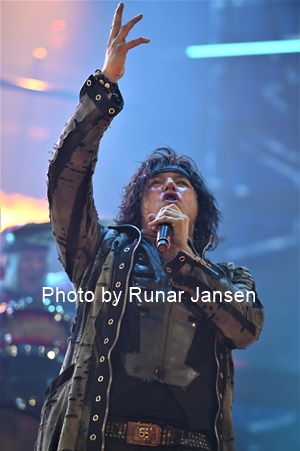 Øystein, I heard you had a health problem, are you alright now? After WIG WAM broke up what did you do? Any music activities?

Øystein/Sporty: Let’s make that clear, I’M FINE, do not have any health problems. At least not more than other “normal” people 😉 I’m healthy, doing workouts 4 days a week. Feeling really good actually 🙂

I have done a lot of gigs with my old band in Stockholm, Sweden “SHA-BOOM”. This is more in the pop-genre-music-type 🙂 Check it out on Spotify 🙂 R.O.C.K. was a really big hit in Scandinavia in the eighties 😉 I have also used a lot of time producing music. I’m working with two artists mainly; MELIx, which is a Norwegian female pop singer. I have produced 5 tracks with her in 2019 and 2020. RED STEEL is a Norwegian rock band which I really like. I did produce their first single in 2020. Check out both MELIx “Det Er Sommer” and also RED STEEL “Unreal”. I do really think that you’ll like this track 😉 You are welcome to contact me concerning these two artists if you like to know more 😉 (S-ROCK: The guitar player of RED STEEL is Sporty’s yougest son) 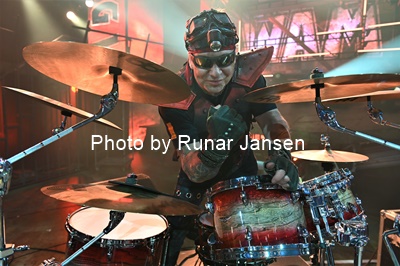 Your messages to your Japanese fans who visit S-ROCK site. Tusen takk! Hope we’ll see your gigs in Japan later, hope not too late due to COVID-19!

Øystein/Sporty: Hope to see U in Japan on tour: Maybe in 2022 🙂 And I think U should keep on using our artist names:) At least mine 😉

Bernt/Flash: Hi! I will always treasure our trips to Japan, and I sure hope there will be a chance to come back once more. It was an experience I’ll never forget. Your hospitality and your enthusiasm really boosted the band in every way. I’m so happy that we finally are back together and that our new album NEVER SAY DIE will meet your expectation. My son has been to Japan several times and has learned the language. He will be studying in Japan as soon the Covid situation is resolved. I really hope we will do some gigs for you guys in the near future. Until then enjoy the music and see you soon!!

Åge/Glam: It really feels SO good to have put the past behind us and made the wounds heal. We have sorted out all our differences and are just looking forward to playing live again. We are definitely coming over to Japan again on a NEVER SAY DIE tour. Stay safe and get ready to be WIG WAM’ed the way you’ve never been WIG WAM’ed before.

Trond/Teeny: I really hope to get a chance to tour Japan again. I have missed you all and I’m so ready to meet you again! Rock on and stay safe!!!!