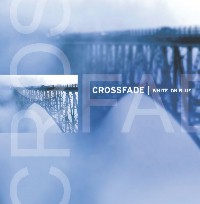 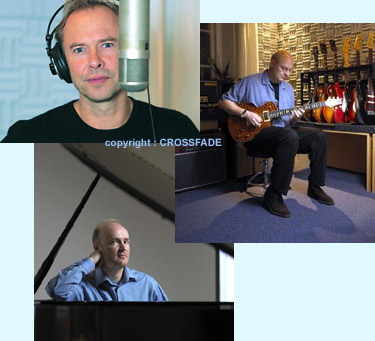 5. A Deeper Shade Of Love> (4:22)
亡くなってしまった親しい人についての曲。愛に溢れた悲しい曲に仕上がっている。GöranとRichardの素晴らしい演奏が冴えるピアノ・バラード。Göranは巧くゴスペルのアレンジも取り入れている。通常こういった曲はアルバムの最後に収録されるものだろうが、とても気に入ったのでアルバムの中盤に収録する事にした。 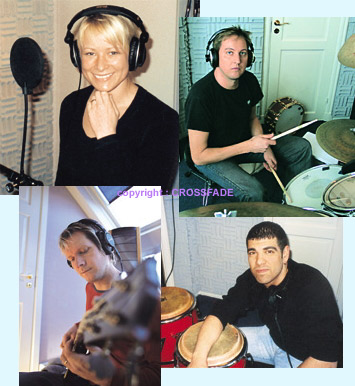 CROSSFADE started as a project when we, guitarist Lars Hallbäck and keyboardist Richard Stenström, started writing songs together in 1999. We were later introduced to singer Göran Edman, through a mutual friend, and the three of us finished up the songs to be recorded on the album WHITE ON BLUE.
The recording took a very long time since we decided to re-record all the  ackgrounds after we had teamed up with drummer Per Lindvall and his brother the bass player Sven Lindvall. The groove they introduced to the music was so inspiring that we recorded everything from the beginning.
After that, we spent a lot of time just recording the preproduction vocals and lyricist Eva Olson took on the job of writing the lyrics.

Eventually the final recording started. We spent a lot of time with the vocal arrangements as well as everything else, as you can hear on the album, WHITE ON BLUE.

We contacted percussionist Pablo Cepeda, who did the conga/bongo tracks.

Nina Inhammar recorded some background vocals and the horn section did their bit. The horns being: Leif Lindvall trumpet, Hans Dyvik trumpet, Urban Wiborg trombone and last but not least Wojtek Goral on saxophone. Wojtek also did the sax solo on Flying.

CROSSFADE stands for TRANSITION. Transition through all the inspiration and heritage we carry and have gathered through the years. You can hear influences from the, 60´s, 70´s, 80´s up till modern days transform into the sound of CROSSFADE.
Of course we lean toward the music one might call West Coast/AOR but we have tried to take it a bit further. You can hear vocal arrangement sounds from the 60´s as well as the 70´s, 80´s and with a production that transforms it into the 21 century. We tried to bring a mix of songs that crossfades/transforms into something new and fresh and not like a remix of something previously done.
The fans of TOTO, Foster, Sting, Graydon, Pages, Michael McDonald, Steely Dan, Don Henley and MR.MISTER will hopefully find their appetite satisfied here.

Per Lindvall- drums and percussion: Per has played with everyone that’s something here in Scandinavia. He’s considered the NO. 1 drummer up here. Works with everybody from ABBA to Michael Ruff. He’s been touring with a-ha lately.

Sven Lindvall- bass: Sven is Per’s little brother and is also a session player and producer. Sven tours with a-ha as well. Regarded as one of the best bass players here.

Pablo Cepeda – congas/bongos: Pablo is also a session player, he works as producer and a songwriter, he’s also a great singer.

Lars Hallbäck – guitars: Lars has played in bands since the 70´s in hard rock acts,  during the 80´s in AOR type band and now with CROSSFADE. Also worked in studios, as producer and engineer. Engineered and produced this album together with Richard.

Richard Stenström – keyboards Richard is an amazing keyboard player and songwriter. He has also played in a lot of sessions.

Nina Inhammar – background vocals: Nina used to be in a pop act called FRIENDS here in Sweden. She is now in a popact called NINA & KIM.

Leif is the oldest of the Lindvall brothers. He arranged the horns on WHITE ON BLUE.
All these guys are professional session musicians who plays in the rock opera- CHESS and tour with various acts.

All song were written by Lars Hällback, Richard Stenström, Göran Edman. And all lyrics by Eva Olsson. Published by ELLER MUSIC

For the MIX we got in contact with the best we have here in Sweden, Ronny Lahti. Ronny is the nicest man there is and has worked with all the big acts here. Has worked with EUROPE and ROXETTE.

For the mastering we stayed “top notch” and worked with Björn Engelman at CUTTING-ROOM – magic!

The mix was done at Ulf Kruckenbergs studio- Megaphon.

Our friend /manager Pär Winberg did a great job and helped us sign with record company MTM-Music in Munchen Germany and through them NIPPON CROWN in Japan.

1. The Day The Music Died- 9/11. (7:33)
A song about Sept 11 2001 NYC. We wrote this song shortly after the terrorist attack on the twin towers. Like everybody else we where shaken by this horrible act, and the way it changed our lives.
The song starts with a drumloop that evolves as the drums and percussion takes on. It sets the mood for the album.

2. Did You Really (5:41)
About a relationship which is over-and it´s all for the best. A jolly tune with dark lyrics. “MANHATTAN TRANSFER” big vocal arrangements on the verses moving into rockier courses, with a great lead guitar and a smokin´ synth lead at the end, you can also hear the horn moving in on the bridge.

3. Vanity Fair(5:03)
About stardom/fame, a variation of the old blues theme: Nobody knows you when you’re down and out. Fame at any price.
A cool smooth song with Per playing along the synth drum all through the song – amazing. Nina joins on background vocals. Could be a single.

4. Flying (5:56)
A song about letting go, daring to take chances. You have only got one life so you had better do something with it since there’s no dress rehearsal.
A smooth jazzier east coast song. Very cleanly instrumented laid back with a great sax solo in the end by Wojtek. A favorite.

5. A Deeper Shade Of Love(4:22)
About a close person who’s passed away. A sad song filled with love. A piano ballad with fantastic performances by Göran and Richard. Göran added some nice gospel arrangements. Normally such a song would have been placed last but we liked it so much that we thought it was a good idea to put it in the middle.

6. Thorns Of Life (5:00)
No matter what you do or who you are- in the end you are all alone. A song in a slightly more progressive style. A reflection on loneliness.

8. Time (5:30)
Time will heal and time will tell. A ballad with great vocals from Göran and lots of “wire” guitars and choirs.

CROSSFADE has started the recording of their next album, featuring the same band. 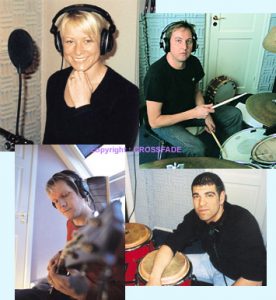 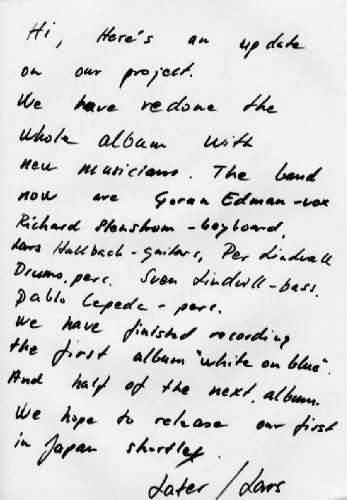 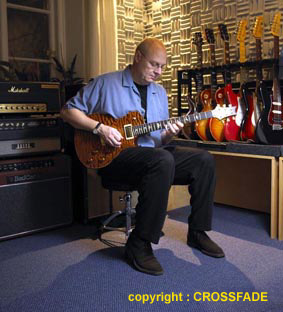 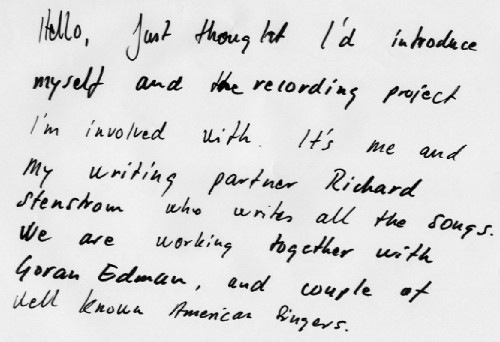 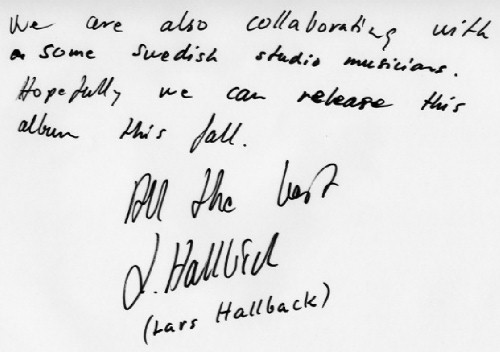 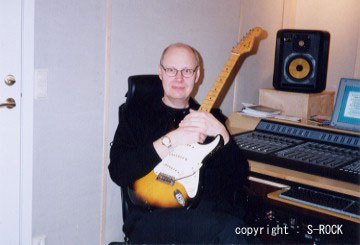